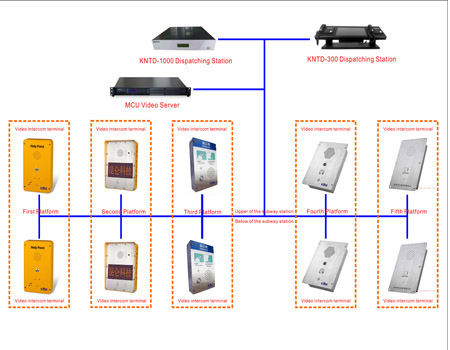 Network instruction:
1. placing a scheduling host computer of KNTD-1000 and a video server of MCU in the subway room for handling of the video intercom.
2. place a scheduling of KNTD-300 in control room and visit the scheduling host computer of KNTD-1000 through through the LAN IP address.
3. place a few video intercom terminal in every station . you register to the scheduling of KNTD - 1000 by the subway network, it can carry out the video intercom calls.
4. Operators can dispatch to video server and video intercom terminal through dispatcher.
it can execute pop-up window display in the screen. at the same time,it can control a strong insert, evictions,recording and wire taps for a telephone call.

Cluster intercom: use the car, hand machine and special scheduling telephone terminal, can be achieved with traditional cluster as half duplex communication intercom.MD - IP intercom system do not change the user of the original use habits and it can realize the mixture of wired and wireless intercom network.

SMS command: dispatching center can send samll text to a person dispatched through dispatching station or other multimedia terminal with the form of messages.In is dispatch personnel to perform the noisy place is not convenient to make noise or noise, text scheduling play a large advantage when a person dispatched is not convenient for produce sounds or a noise occasion.

video scheduling: system will be fixed surveillance cameras, staff's mobile phone camera, individual package for dynamic video data compressed encoding sent over the network scheduling system is saved in the host, so as to can abserve when necessary in the future.At the same time, the command center (or related personnel) can real-time look dynamic images through multimedia terminal adjust.and understand the situation and make a command.

Preset radio: MD - IP system can play sound files in advance that have stored scheduling the host. it play
the corresponding radio broadcast according to the set in the contingency matters.

Group meeting: the administrator can divided  into several groups  according to the customer's needs  and set permissions terminal. it can launch meeting access terminal, through the IP phone, outside call, car or mobile phone.

Multilingual support: dispatching system can choose a variety of language, it is convenience to use for different countries and regions.

Data storage: system can record all kinds of operation and the alarm logs, video and text instructions, allow managers to read the playback, these are used as a important basis of  scheduling process repeating action.

Visualizations terminal state: scheduling system can visually display the current state of the terminal, idle, calls, whether it is registered in the display.

Image acquisition: it can collect  image through via IP camera, 3 g mobile phone cameras and transfer it to the command center , or display to the scheduling software. You can choose whether to save the image data According to the needs.it can adjust the direction of the camera with haeundae function and display By scheduling software.

Optional encryption channel: Koon Technology can encrypt for voice and data through special arithmetic if customers have special requirements.

Frame structure, the perfect function and humanized design can occupy high market share in the video conference of fierce competition.
Emergency Preparedness System: When the alarm system monitor emergency occurrence in some place, it will automatically trigger alarm signal and output to the scheduling server. Scheduling server will start emergency preparedness system. The system will call or broadcast to responsible person or related call dispatch terminal to prompt alarm ad per pre-set relevant number.

Video linkage function：When a dispatch terminal (IP phone or radio terminal) call control dispatcher, dispatch server automatically dispatch IP camera corresponding to IP phone and automatically pop-up display on the big screen, and you can see the current status of the corresponding point of the IP phone . When accident occurs in some place, dispatchers can see the information directly on the big screen so that dispatcher can inform staff here immediately via IP phone, or directly through the company's outside call the responsible.
1.1 Production Introduction
1.1.1 KNTD-1000 Dispatching Host Server 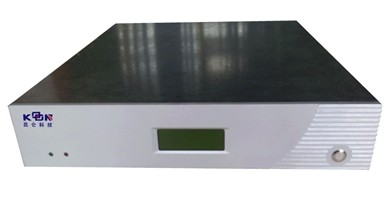 When the called user has several optional Numbers, According to the need to take the call.

Dispatching call extension and outside user functionality: The dispatcher to pick the machine, Press the free users, Call the customer. When the user for outside users, The relay dial-up automatically.

Strong Dispatching function: The dispatcher to be non-blocking calls with other users.

Dispatching the calling function：Operator continuous call don't hang up to other users on the phone.

Dispatching group calling function: The dispatcher to call a set of user/group at the same time.

Dispatching Rush to hang function: The dispatcher can hang down will not hang up the user push to rush to hang.

Dispatching transfer function: When a dispatcher answer a call(Including middle discontinuous), Then, The dispatcher could press a third party through to the other user. realize three users communicate by telephone. That means It could transfer the line to other user when the dispatcher hang up the phone.

Hold function: Keep talking to the dispatcher user, After talking to other users again back to the user, Continue to call. If setting ”Keeping” first, you could recoverable calls or to join in later.

Monitoring user function: According to the user permission to use this function. Once a couple of phone users monitoring.  According to user requirements can be set up by listening phone users whether both sides listen to inform, But did not hear the dispatcher.
all queuing function: When there are multiple users call dispatcher station at the same time. Users will be on the incoming line function. And there will be voice prompt.

Blacklist: The system could provide the harassment telephone query function. It could query the source of harassing phone calls. And set it as a called control mode.

State display function: Dispatcher station could proceed to the display of the whole network statement.

A single bond exhaled function: The dispatcher button simply click on a user can complete the user call to connect all the work.

Record function: Is the entire recording system can 24 hours a day for operator call recording, And saved to the hard disk, The wav format.

Broadcast speaker: Cooperate with special speaker terminals, On the dispatching by radio, The controlled terminal can be automatically switched on. Through the function, Dispatch personnel to quickly give orders. As well as the emergency notification.

Video surveillance: Dispatcher station can be realized through the interface and video terminal linkage, See the scene real-time video,

Orientation: Through the ground using GPS technology for mobile vehicles. Such as real-time monitoring and positioning. Downhole deployment RFID can position the staff attendance and and and and dynamic trajectory playback.

BV2000 video conference system is Koon specially tailored for small and medium-sized enterprises.it’s a Modern office system,video conference through a communications network to connected with two or more locations of the multimedia conferencing terminals, transmitting images, voice and data signals, make people feel on hand to attend the meeting. In the field of government administrative meetings, business, emergency rescue and disaster relief emergency, bank system, remote education, remote medical treatment and security system, the army business and office automation etc. The video conference system have very big development space. With the development of the society, the application of video conference is more and more widely, and at the same time, the quality of the video and audio, practicality, ease of use, safety and aesthetics requirements are also increasing.
BV2000 system meets the standard 19-inch shelves structure, its perfect functionality and user-friendly design makes video conferencing in a competitive market is still able to have a big market share.
BV2000  Features as below：
 Support B/S mode ：Web-based management enables customers to better familiarity with using this system.
 Supports multi-user privileges mode: administrator mode and user mode. Administrators have high privileges, you can set the parameters as well as meetings to view, create, and leading conferencing capabilities etc. Ordinary user can only see the part of the information.
Based on the SIP standard: compared with the traditional video conference system, its more flexibility.
 Dynamic layout distribution: when a participant leave or join the conference, participants will be automatically displayed on the screen, more humane.
 Wired / wireless network support: BV2000 supports wired network devices, but also supports wireless mobile network equipment to facilitate the participants to join the meeting at any time and place.
Chairman of the Management: Chairman of the participants can always control the proceedings, to mute a participant, allowed to speak, kicked out of the conference and other operations; while you can change the display mode of the page layout.
MD-BW1.2  Universal scheduling control software MD-BW1.2  Scheduling control software is designed specifically for enterprise by KOON technology, it can make the broadcast operation simple and intuitive. Scheduling control software can be applied to the KNTD-200 broadcast console of Koon Technology or on an ordinary PC, PAD operation scheduling software.It can visually see the status of each packet and dispatch terminal can be achieved unicast, multicast via touch screen (or mouse) clicks, the entire play, listen, preset radio broadcasting operations.You can view the broadcast system intuitive call list and recording data. Broadcasting is an indispensable tool for broadcasters.